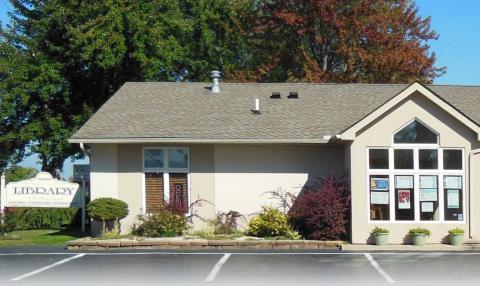 The Newport Branch Library first opened in April 1943.  The collection contained about 950 books and was located in the Partlen Coal Co. office building.   The Library later moved into the Newport Fire Hall.

At the end of 1971, because of financial problems, the Monroe County Library System announced that the Newport Branch was one of four that it could no longer maintain.    The township board received a petition signed by more than 90 Newport area residents who wanted to keep the branch open.  The board decided to keep the branch open, using funds given to Berlin Township under the federal emergency employment act.  In January 1973 the Librarian went back on the library payroll.

In 1988 the library received a bequest of $100,000 from Mr. Leo Boudinet, a native of Newport.  The bequest was to be used to maintain the Newport Branch Library or could be used toward the building of a new branch.

On January 20, 1991, Berlin Township officials closed the library due to the building being condemned for being unsafe.

Renovations on a 3,400 square foot building, donated by the A. E. Wisne family, began in 1999, and the Newport Branch Library once again was open, almost exactly nine years to the day that it closed.  Opening ceremonies were held on Sunday, January 23, 2000.

A large study room is available at this branch. Please call ahead to reserve the room.

Events at the Newport Branch Library