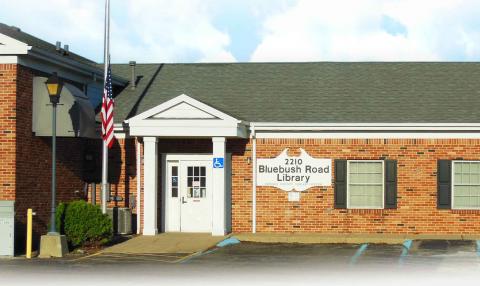 On April 16, 1986 the Blue Bush Road Branch Library opened to the public.  Frenchtown could now boast three libraries in their township.

The new library, located at 2210 Blue Bush Road, was built behind the old Marron School.  The school then became a temporary fire hall.  By the fall of 1986 construction on a fire station, connected to the library, had begun.  When the station was completed, the school was torn down, leaving the beautiful library/fire station in full view.

Bernie Margolis was the director of the Monroe County Library System in 1986.  Margo Zieske was the first librarian hired to facilitate the new Blue Bush Branch.  Mrs. Z, as she was known to many, recalls helping to fill the building with new books and borrowed books from the Ellis Reference and Information Center.  She remembers fondly being part of the opening of this new library branch.  Jennifer Singel followed Margo as branch librarian in 1996.  Diane Flor served as branch librarian from 1997 until 2000.  Jane Steed became the supervising librarian for the three Frenchtown Libraries in 2000, while Peg Engel became the branch technician.