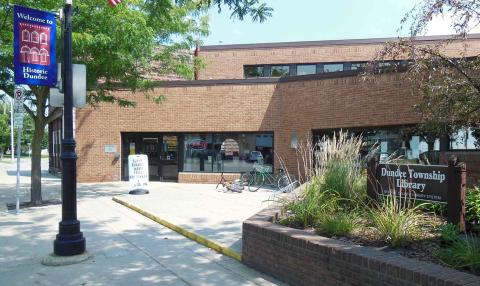 In 1934, the Monroe County Experimental Library was established with the aid of CWA funds. Mrs. Lillian Navarre, State Librarian, and the Monroe group of the University of Michigan Women were instrumental in this organization. Dr. J. H. MacMillan and the local Exchange Club were responsible for securing operating space in the rear of Ford’s dry goods store in Dundee to house the library’s headquarters. Miss Ruth Dancer of the University of Michigan was selected to head the new county library, with Mrs. Blanche Rolph as an assistant. On March 16, 1934, the doors were officially “opened for business.”

The Monroe County Board of Supervisors, on April 5, 1934, legally sanctioned the library by passing a resolution: “To create a County Library.”

The system grew rapidly and in June of 1934 consisted of six stations (Dundee, Samaria, Ida, Rea, Grape, and Carleton.) Between 25 and 50 books were placed at each location and changed every few weeks. By July 1934, the library had approximately 1,200 books at Dundee and the other five stations (some on loan from the State Library.) Circulation was estimated to be 4,743 books with 587 users since the opening in March of 1934.

An early newspaper article pointed out: “Facts such as these cannot help but show the need and demand of a library serving the county. Miss Dancer informs us that the 12 mystery stories presented to the library last Tuesday evening were all distributed by Thursday noon and two of the books had been used twice.” (Dundee Reporter, 9-9-34) A very successful book drive was held to increase the inventory of books.

A shortage of funds, however, forced the closing of the library in September of 1935. The books were taken to Monroe for storage.

With the help of WPA funds the library was reopened in December of the same year. In addition to loaning books, book repair services were provided by the library to the local schools for a small fee. Mrs. Blanche Rolph became the Dundee Library Attendant under Mrs. Navarre, County Library Supervisor. Arrangements were made to house the library in the Township Hall with the heat and lights to be provided by the Township of Dundee. Mrs. Navarre also supervised branches in Petersburg, Ida, Maybee and Milan.

At some time in the late 1930s or early 1940s, Mrs. Geraldine Sullivan served as Dundee librarian.

By 1944 the Library had outgrown its physical plant and was moved to a new location on Riley Street, formerly Rauch’s Bakery. Miss Helen Ewing was appointed Librarian and Mrs. Mae Brandt was Assistant Librarian. Again in August of 1949, the Library was moved, this time to the location at 139 Main Street, where it operated until the opening of the new library building in 1987. Miss Fay Heuple was the Dundee Branch Librarian.

In 1983 Mrs. Ellen Kay “dreamed the dream” of a new, larger, more modern and efficient building to house the Dundee Library and was instrumental in forming and motivating the Dundee Library Advisory Board to undertake the task of making it a reality. That dream now stands at 144 East Main Street. The site was selected by the Dundee Township Board in September, 1984; the groundbreaking ceremony was held September 6, 1986. David O. Peters Associates, Inc., (Ann Arbor)) designed the building and the construction was completed by the Kreighoff-Lenawee Company. The Library was moved on September 14, 1987 and the doors of the new facility opened September 25, 1987.

The Library was made possible by a Federal LSCA Title II grant, a generous anonymous donation, the Dundee Township Board, the Dundee Village Council, the local business community, numerous private donations, and the generosity and goodwill of the citizens of Dundee Township.

[This history has been taken and slightly revised from an account written on the occasion of the Dedication of the Dundee Branch Library, November 1, 1987, by J. Ellis.]

Events at the Dundee Branch Library