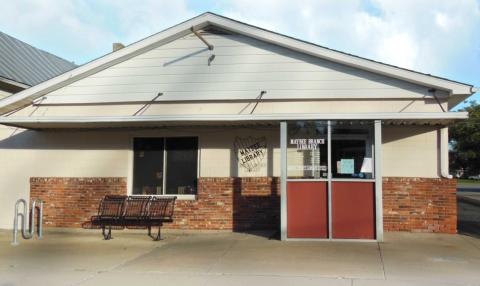 The Maybee branch of the Monroe County Library System, part of the W.P.A. project, was officially opened Thursday, August 10, 1938 in the village fire hall on Raisin St. with Mrs. John (Muriel) Bodine of Scofield as the W.P.A. librarian.  Miss Rose Drouillard of Exeter was her assistant.  The branch was open from 12:30 to 5:30 p.m. each afternoon and from 7:00 to 9:00 p.m. Wednesday evenings.  The library, as a W.P.A. project, was under the supervision of Mrs. George (Lillian) Navarre, county librarian.

Mrs. Richard (Sadie) Vivian, director of the Maybee School Board and chairman of the library, accepted the library on behalf of the community and said she hoped the people would never be without library service again.  Thirty people attended the opening, including Russell Reiser, village president, and Mr. Fred Gruber, Raisinville Township Supervisor.  Talks were given by the Rev. Father Albert George, pastor of St. Joseph’s Catholic Church, and Mrs. Martha Cameron Smith of Detroit, who represented the W.P.A. women’s and professional project in this district.  The Maybee Library opened with about 35 books donated the citizens in the community.

As time went on, the Maybee branch increased in both the number of its patrons and the amount of circulation.  At the end of the fiscal year (June 1940), the circulation was 5,211 books and magazines, and the branch served 12 schools and 15 teachers.   The library also served as a focal point for discussion groups, as well as a meeting place for the 4H club and many other activities.

On October 21, 1941, members of the Lucia Lauer Wagner Tent #29, Daughters of the Union Veterans of the Civil War, presented an American Flag to the branch.

In January of 1943, the W.P.A. assistance was withdrawn from the Monroe County Library.  From then on, most of the operating monies came from State aid and penal fines.

On January 31, 1945, Mrs. Rose Wehrung took over the duties of branch librarian from Mrs. Muriel Bodine, and remained as librarian until her retirement in December 1958.
During Mrs. Wehrung’s tenure, the library facilities were moved from the fire hall to the Kohler Hotel which was located on Raisin St. in what is now the Liedel Funeral Home parking lot.  The library was located on the second floor and had no water, so water was carried by bucket up to the library.  Upon Mrs. Wehrung’s retirement, Mrs. Virgil (Elinor) Leininger took over the duties of librarian.
In January 1959, the Maybee branch moved into its own building on Blue Bush Road, originally owned by Henry Liedel I who had operated it as a furniture store with caskets in the upstairs.  The additional floor space enabled the village and the township to put in more shelves which allowed the library to increase the amount of books and magazines available to the community.

On February 18, 1960, Mrs. Leininger organized the Maybee branch Friends of the Library.    The officers of this group were as follows:  Mrs. Russell (Betty) Navarre, president; Mrs. Virgil Leininger, secretary; and Mrs. William (Dora) McCord, treasurer.  The objective of this group was to assist the library in any way possible.  Bake sales were held and the proceeds were used to purchase drapes.  In addition to bake sales, dues were collected and this money was used for parties for the youngsters at the end of the summer reading programs.

In November of 1963 Mrs. William (Dora) McCord took over as librarian.

The Friends of the Library continued to hold bake sales in order to raise the money to improve the physical appearance of the interior of the building with Mrs. Carl (Esther) Rupp donating her time to paint the walls.  At a later meeting the Friends decided to hold further bake sales and buy carpeting of the building.  Mrs. McCord talked to several of the teenage patrons and asked them if they would like to become involved in the project and that is how the Young Friends of the Library was formed.  On June 23, 1969, officers were elected:  Wilma Woods, president; Anna Gail Stacy, vice-president; Cathy Kalanski, secretary-treasurer; and Mrs. McCord, advisor.  The original group was made up of 14 young people.

After the purchase of the carpeting the Young Friends wanted to know if they could hold dances in order to raise money for future improvement to the library.   In October 1969, the first dance was held at Madonna Hall in Maybee, and subsequent dances were held at the V.F.W Hall in Maybee.  The monies raised from the dances was used to do other library improvements and activities.  The Friends worked with other organizations on different civic projects.

The function of the sate division is to gather community support for the library, in much the same manner the Monroe County Friends of the Library support the county system.

In July of 1976, Mrs. Sam (Sue Ann) Hartford became the new community librarian.  In 1978 the owner of the building passed away and it was to be sold by the estate so the library made arrangements to move into the Jennings building on Raisin St.   With Mrs. Gilbert (Delores) Steinman working at the old library packing material with the Young Friends of the Library and Friends we started moving the library in the morning to its new location and in the afternoon Mrs. Steinman locked the door on the old library and join Mrs. Hartford for a pizza party in our new location.  We finished putting things away on Sunday and opened Monday afternoon in our new location.  The move to the new building was a big improvement over the old one in that we had more shelf space and storage.  After several years it soon became apparent that we were outgrowing this space.  The purchase of new metal shelving allowed us to have more materials for the community to use.

In 1987 the Miller Hardware building became available for purchase and Ken Wartinger, the president of Maybee Library Advisory Board contacted all the governments about the possibility of purchasing the building to house the library on a permanent basis.   After some discussion, the Raisinville Township, Exeter Township, London Township and the Village of Maybee agreed that it would be better for the governments to own the building instead of renting one so the Maybee Library found its permanent home right across the street from its first home in 1938, the old village hall.
After some renovation, the new building was ready to move into and plans had been made to move the library over the Fourth of July weekend and because it was just across the street we had decided to use book carts to help with the move.  On the morning of the move we had a big surprise when we discovered that the road had been crushed to get it ready to be resurfaced so we had to redo our move plans.  This involved getting pickup trucks and other large vehicles that we could load in the alley, drive through the mill and over one block to park behind the new library and be unloaded.  We started the move on Saturday morning and opened the new library on Monday.   Magic in Maybee, the official opening for the new library was September 20, 1987.

The Maybee Library received a grant in 1989 and was able to do some major improvements to the library:   a work storage area, front door enclosure, drinking water dispenser and paved parking area.   With donations from Marion Biccum, in memory of Jack, her husband we where able to have a new circulation counter and children’s shelving made.   When Marion passed away we use the memorials to us to finish having shelving made for the children’s room, creating the Biccum Kids Zone.

The Maybee Library celebrated their twentieth birthday in our building in July 2007.

The Maybee Branch Library Advisory Board is composed of two members appointed from each of the government units and the branch librarian. The building is owned and maintained by the four units of government. Staff, collection, computers, and services are provided by the Monroe County Library System. The Maybee Board is responsible for creating and administering the budget for the Maybee Library. The board meets about four times a year at the library and the meetings are open to the public.

Events at the Maybee Branch Library