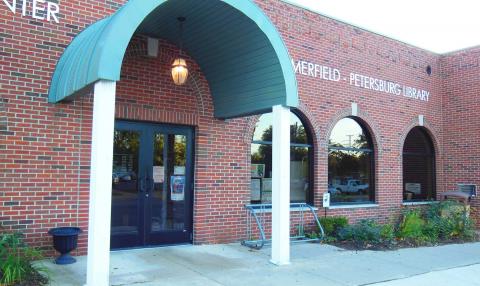 Petersburg Branch Library was first officially opened in 1936 in the small front room of the G.L. Mead building, under a Work Projects (WPA) grant. The Mead building was situated at the present site of the new Community Building and history repeats itself with the present building returning to its original location.

The earliest records of a library in Petersburg indicate service was available under the name Summerfield Town Library, which was probably directed by the local school board in the 1850s.

The next record of a library appeared in an 1881 issue of the Petersburg Bulletin when the Township Librarian, James H. Gage, stated he would seek legal action against those who had drawn valuable books illegally by loaning them to friends without going through library procedure.

In 1936, the Summerfield Township Board requested a branch of the Monroe County Library System be located in Petersburg. To extend service into the western part of the county, the request was granted and some 500 books were assigned to Petersburg. Miss Laura Sylvester, of Ida, was appointed as the first Petersburg Branch Librarian. She served at the store-front location for three years, resigning in 1939 to accept a similar post in Ida. Miss Alice Kohler was appointed as replacement, serving until 1943, when she accepted a teaching position.

The library had been moved to larger quarters on Saline Street, in a former plumbing shop owned by Sam Drouillard. A rental fee of $5.00 a month was paid for use of the building. Among librarians who served at this location, until 1945, were Miss Margery Harwick, Miss Edith Gartee, Mrs. Harold Pickens, and Miss Mary Harwick. The library had been open ten hours weekly at first and later increased to fifteen hours. In early 1945 all Monroe County Libraries were closed for lack of funds.

With the financial structure regained for the Monroe County Library System, Petersburg Branch was reopened on December 10, 1945. Mrs. Carl (Irma) Schmidt was appointed as Librarian. The total number of books assigned to Petersburg had reached 1,163 by the end of 1945.

The room in the Drouillard building was redecorated by Petersburg High School Students with painted orange crates for shelving and a small walnut shelf hanging on the wall to hold the reference collection of some twelve volumes.

In April 1954, the library was moved to the Sam Fedell, Sr. building, a few stores north on Saline Street. The Fedell building was renovated with fresh paint, new flooring, shelving, and a new oil burner stove.

In 1956 larger quarters were obtained when the east half of the Masonic Building on Center Street was rented for library use. The library half of the building was refurbished to accommodate the expanding needs of the library with the construction of new wooden shelving, freshly painted walls, linoleum tiled floors, new drapes and furniture. An additional 680 volumes were added by the Monroe County Library System, making a total of 2,841 books available for local circulation. Library hours were extended to 20 hours weekly. This location served the community for 22 years.

On May 13, 1972, Irma Schmidt retired as Petersburg Librarian, and Mrs. William (Virginia) Gee was appointed to fill the position. During that year hours were again increased to 30 hours weekly.

In 1973, Virginia Gee, with assistance from library patrons petitioned the Petersburg Centennial Association, the City of Petersburg, and the Township of Summerfield to provide funds for, and to obtain a clear title to the former Fire Hall building for use as a library facility. The petition was rejected due to the poor condition of the old building and the fact it would require tremendous cost to remodel. The petition was not a vain effort, however, since it became the basis for consideration of erecting a new building.

In December 1978, the new Summerfield-Petersburg Community Building was opened with the Petersburg Library occupying one half of the building, and the Community Room occupying the other. The Herrick Foundation, the Petersburg Centennial Fund, and the Rix Memorial Bequest provided the majority of the money used to build the community building. Generous contributions from individuals and groups in the community provided the additional funds needed to make this new facility a reality.

In October 1987, a Heritage Room was opened in the library. It was made possible by contributions from the Mrs. Lillian Koppleman Estate, and from the Petersburg Volunteer Fire Department of Summerfield Township. Available in this room are books on the history of Monroe County, local family histories, and a microfilm and microfiche viewer. Mrs. Beulah Mens volunteered starting in the 1980s until 1994. She organized clippings from local newspapers dating back to 1882.

In 1995 the circulation system became automated.  It was the beginning of the library entering the technology age.

In 1998 Cindy Green moved on to become the Community Librarian of the Dorsch Memorial Branch in Monroe. Jodi Russ began as Community Librarian in May of 1998.  Jodi accepted the position of Technology Trainer in December of 1999.  During her time at Petersburg, Jodi worked closely with Petersburg resident, Frances Steffans.  Together they coordinated the large historical collection of pictures you will find hanging in the branch today.

Doris Sheldon was appointed as branch librarian in early 2000.

In 2003, Jack Schankin began volunteering in the Local History room. He continues to play a major roll in collecting, preserving, and organizing information for this collection.

A steady increase of library services was noticed by the Summerfield-Petersburg Library Advisory Board in 2003.  The Library Board began to investigate the possibility of a library expansion and renovation project.  Shortly after this, the City of Petersburg and Summerfield Township jointly purchased 56 and 58 E. Center Street next door to the existing library. This building formerly housed the River Raisin Collectibles and Consignments Shop and The Dance Studio.  In August of 2006 a millage to fund the library renovation and expansion was defeated by five votes.  The Library Advisory Board discussed this loss and decided to place the request back on the November ballot of 2006.  This time it was approved by over 50 votes.

A building authority was appointed by the city and township governing bodies. Clint Ford, Terri Bauer treasurer, and Noel Dentner took on this role with great regard for preserving the past, embracing the future, and celebrating the present of the library and its patrons.

On February 17, 2008, the library held a grand reopening ceremony and dedication.  At this time, the Local History room was named after Virginia Gee for her dedication to preserving the past for future generations. Since the remodel, the library has continued to grow into a community building in many ways including offering numerous programing for all ages, increasing the collection, and providing access to technology.
In the Spring of 2018, Doris Sheldon retired. The Friends and the Library Advisory Board named the study room after Doris in honor of her long-standing dedication to the community.
In June 2018, Ashley Liford took over as the Community Librarian of the Summerfield-Petersburg Branch.
In May 2022, Catherine Masson took over as the Branch Technician of the Summerfield-Petersburg Branch.

Guidelines for Community Room Use

It is necessary for all public facilities that guidelines be adopted and followed by all who use it.

Meetings are held quarterly. Check the MCLS event calendar to see the date of the next meeting.