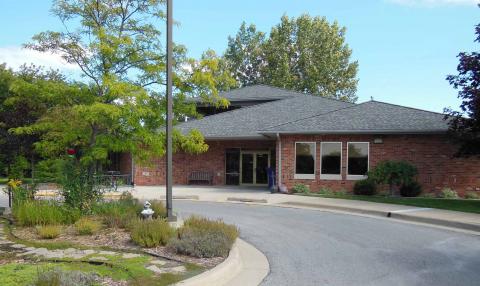 The first Frenchtown Branch Library, originally located in the Monroe County Library System headquarters building on the northwest corner of Telegraph and Stewart Roads, opened in 1942 with Mrs. George Jacoby as librarian. It was a 17½ x 19½ foot room with hardwood floors and automatic gas heat, boasting a collection of 900 books.

When Mrs. Virgil Scheich took over as librarian in 1945, it was apparent that the branch was too small to serve the growing community and meet the increased demand for library service. In 1958, the Frenchtown Township Board decided to remodel a large room in the town hall at the corner of Nadeau Road and North Dixie Highway. The new branch measured 21′ by 40′ and was renovated with new floors, paint and shelving. It was the only branch in the System to be open 5 days a week and the only small library open throughout the summer to provide service to residents in the beach communities. A Friends of the Library group was formed that year and was instrumental in securing additional improvements over the next decade. By December of 1961, 6,000 books were available from the location to approximately 1,600 registered patrons.

Mrs. Scheich retired from the Monroe County Library System in the early 1970s and helped to create a wonderful, warm and inviting library in the beach community of Frenchtown. Gloria Bond and Kathy Downing followed Maxine Scheich as librarians at the Nadeau Road facility.  In 1981, Jane Steed was hired and became the librarian at the Frenchtown-Dixie Branch Library.

By the 1990s the library had once again outgrown the facility and it was clear that the community needed and supported a larger facility. With the leadership of Township Supervisor James Spas, the Frenchtown Township Library Board and community librarian Jane Steed, plans were put in motion to design and build a library which would grow with the community and serve its needs for years to come. Members of the Township Library Board included Mark J. Baker, Jack Lindquist and Cheryl Case. In 1998 architect Mike Pogliano of Saline, Michigan was selected to design the current facility. A new Friends group was formed in 1999 with enthusiastic members excited at the prospect of a new library. The Friends have been and continue to be a great source of support for the library.

The new library opened on July 14th, 2000. It sits in a lovely wooded setting on Nadeau Road with a small creek to the west of it. The facility has a spacious community room, a large children’s area, plenty of work space and room to grow. The new building houses a collection of over 20,000 volumes and serves a population of about 12,000 people.  Each year circulation increases and use of the library grows.

The Frenchtown Dixie branch is now one of the area’s most popular library facilities and a great source of pride to the community and the Monroe County Library System.