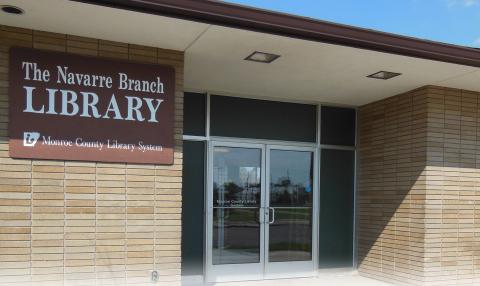 For 60 years the Lillian Stewart Navarre Branch Library has provided service to the City of Monroe. Originally named the East Side Branch Library, it was established in 1937 as a reading room housed in the Trekow Building at 3rd and Eastchester Streets. Library service was undertaken as a joint project of the Monroe School Board, the Dorsch Memorial Library staff, and the Salvation Army under the direction of Captain Alex Stenhouse. While the School Board provided the maintenance, the Dorsch staff undertook supervision. The first librarians provided by the Salvation Army included Mrs. Stenhouse and Lieutenant May Denis.

In April 1938, the city Board of Education took over supervision and maintained the facility as a branch of its Dorsch Memorial Library. During its first year of operation, the library housed a total of 2,500 books consisting of public donations and selections from the Dorsch branch. From the outset storytimes were an important component, serving an average of 73 children in the 15′ X 30′ room.

By 1947 the library had been moved to 1131 E. Second Street where it stayed until 1953 when Morris May, President of Monroe Scrap Material Company, donated his building at 1203 E. Third Street as a library. In September of that year the East Side Branch re-opened with 5,000 books from the Dorsch collection.

In April 1963 the city of Monroe acquired the land on which the library currently stands at Second and Eastchester Streets. The new facility was dedicated by United States Vice-President Hubert H. Humphrey on October 6, 1966. It was formally opened on December 19, 1966 as the Lillian Stewart Navarre Branch of the Monroe County Library System. A collection of 10,000 books for adults and children was housed in the new building.

For the past three decades the Navarre branch has served the needs of the city’s multi-ethnic population. Beginning in February 1971 the branch has annually celebrated the heritage of African-Americans with displays and programs. An annual Blues Festival, begun with a concert at Navarre in 1988, has grown into a major series of free events which have received national and state awards for excellence and which continue to celebrate the musical heritage of African-Americans. This year’s Blues Festival and African-American History programs promise to be the best yet.

Children’s programming over this time has established a special relationship between the community, the Library, and the Arthur Lesow Community Center. Current branch librarian Amber Reed maintains close ties to the community to serve the needs of neighborhood schools, businesses, and the general public.

Mrs. Navarre maintained a life-long interest in libraries and education. She attended Michigan State University and Eastern Michigan University where she received a degree of Bachelor of Pedagogy. She first taught in Monroe County rural schools, then was Principal of Macomb County Normal School. Later Mrs. Navarre taught in the Monroe City Schools and was Principal at Lincoln School for one year.

In 1933, Mrs. Navarre was appointed State Librarian and served in that capacity for two years. In 1935 she returned to Monroe to assume leadership of the newly formed Monroe County Library and remained as its Director until her retirement in 1947.

Mrs. Navarre was appointed to the Michigan State Board for Libraries in 1955 and served until 1960. She served as Chairman of the Board in 1959.

In 1960, Mrs. Navarre was elected to the Board of the Monroe City Schools. She was an active member of the Board for four years, taking a special interest in the expansion of school libraries and contributing to the efforts that resulted in the formal merger of the city libraries with the Monroe County Library System.

It is most fitting that the name of Lillian Stewart Navarre should be preserved for future generations in a library. The growth and quality of the Monroe County Library System for more than 60 years has reflected her vision and her pioneering efforts to bring books and education to the people of Monroe County.