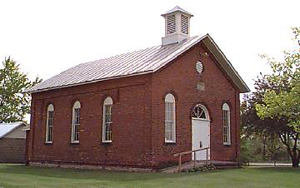 The history of Banner Oak School begins back before Civil War days when the Julius L. Sterns family settled on a piece of property near this location. An old tax bill of 1853 shows a wooden frame schoolhouse was on the N.E. corner of Crabb and Sterns Roads. Known as the Lord School, it was used from at least 1853 until 1871.

During the Civil War, Sterns hung an American flag from the huge oak tree in the schoolyard. Legend has it that he said whichever side the flag falls would win the war. During a severe storm, the banner fell…and the rest is history.

By 1871, the little wooden Lord School was crammed to capacity. The new school, brick this time, was built just across the road. Still called LORD SCHOOL, it would later be named “BANNER OAK” after that memorable legend. It housed the children of the district from Dean Road, one mile North, to the Ohio State line, one and one-half miles South. It extended East to the district line of Morin School and West to Lewis Avenue. The School Board and parents provided the best education of its kind for their children. In 1932, they had hot lunches and visits from the County Nurse. Up to 1933, County Exams were taken in Temperance.

This brick school is 125 years old in 1996. It served as a one-room schoolhouse with grades one through eight until 1929. A student body of fifty-two children and one teacher made its facilities so crowded that a portable classroom was built on the east side to house a second teacher and the lower four grades. Banner Oak was a two-room school until the end of the 1947-48 school year. Then it became part of the recently (1946) consolidated Bedford Rural Agricultural School system. Banner Oak was the last rural school in the area to do so. The two room school then housed fourth, fifth and sixth graders until it was closed at the end of the 1955-56 school year. The school bell was removed for safe keeping and the school stood alone for some time.

The Township Board bought the school for $1 and used it until the early sixties as a voting precinct. During the sixties it was used for services of Bedford Missionary Baptist Church and was a branch of the Monroe County Y.M.C.A. The portable building was destroyed by fire in the early seventies.

In 1973, the Little Theater Group of Bedford became interested in remodeling the schoolhouse for a Community Theater and many articles appeared in the Bedford Courier. They had hoped to have it ready for the Bicentennial in 1976, but to no avail.

In 1978, another effort was launched and friends and alumni of Banner Oak were attracted to the project of restoring the old school. With two efforts of raising funds, $1,500 was obtained from several old families of the Alumni and some local businesses. Through their efforts and with much help from the members of the Historical Society of Bedford, Banner Oak School has now been restored as a one-room school and is on the Michigan State Register of Historic Sites. It is the only building in our township that is so designated. On May 18, 1986, Banner Oak School was rededicated at a special ceremony to help celebrate the 150th anniversary of Bedford Township.

Today, with the aid of volunteers from the Historical Society of Bedford and the Banner Oak Alumni, Banner Oak School has become a Living History Museum. Local teachers bring their students to spend a day in the manner their grandparents or great-grandparents did at the turn of the century.

A History of Banner Oak School has been written by Trudy Urbani in cooperation with the Historical Society of Bedford and the Banner Oak Alumni and published by the Monroe County Library System as the first volume in a projected series of local history books, “A Bedford Sampler.” The books are available to view at the Bedford Branch Library or Ellis Library & Reference Center Reference Departments.

About the author:  Trudy Wieske Urbani and her husband Aldo have lived in Bedford Township over 25 years. They have two children who attended Bedford Public Schools and two grandchildren. A graduate of the University of Toledo, the author has taught the gifted students in both Bedford and Jefferson Elementary Schools, retiring in 1993. As current president of the Historical Society of Bedford, she felt it important to celebrate the 125th Anniversary of Banner Oak School with a book relating it’s history.  “By documenting some of the past, I hope to renew an interest in the local history of Bedford Township,” she wrote in 1996. “This and future generations deserve to know where they came from, so they can help determine where they are going with their lives.” 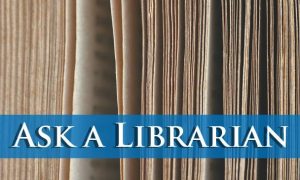 Reference Librarians from the Monroe County Library System are happy to help you find information about the local history of your community.