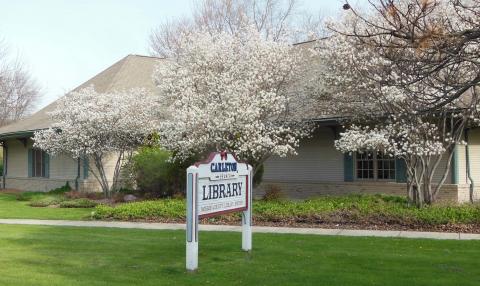 The Carleton Branch Library building is owned and maintained by Ash Township. The community room is available for public meetings under the following regulations:

The Carleton Branch Library has the honor of being one of the first branches of the Monroe County Library System, opening on June 19, 1934 with 200 books.* The books were loaned from the State Library of Michigan and the University of Michigan, and they were shelved in the office of the local newspaper, The Carleton Messenger. Eighty of the books were for adults, and the remainder were for children.

There was no library building. Mr. Will Wright, the editor and publisher of The Messenger, agreed to provide shelving space in the small newspaper office on Mill Street. C.H. Reiser & Sons Lumber Company donated boards for the shelving, which was hastily constructed.

During the first month 413 books were circulated with patrons helping themselves – as there was no librarian. Borrowers recorded their names and the title they were taking on a piece of paper, and all books were circulated on an honor system. The first citizen to borrow a book was George E. Lang, a local historian and mapmaker. Editor Wright was listed as the official librarian.

The Depression years and those of World War II were turbulent times for the Carleton Branch, as well as the newly formed Monroe County Library System. An interesting footnote is that some of the funding in the late 1930’s was through the WPA, whose guidelines required that employees be young and single. The Carleton Library ‘lost’ a succession of librarians to marriage! Funding was always uncertain, but the library had become an integral part of the community.

In 1935 a county association was organized to devise methods and means to secure additional books for circulation. Edith Wagar, a local teacher and principal, served on the county library board. Miss Ruth Dancer of Chelsea was county librarian under the direction of state librarian, Lillian Navarre of Monroe. At this time there were less than 1,400 circulating items in the system.

In June 1935 a summer reading program began, and Mrs. Clayton Sims of Labo Road was hired on July 15 as part-time librarian with federal funds which could only be used for salaries for county librarians.

In September 1935 the county administration ordered all books taken from the Messenger office to the welfare office in Monroe to await further instructions because funding for librarian salaries had run out. Mrs. Sims remained in the library without pay for two weeks to collect returning books and pack them for shipment to Monroe.

Two months later the books were returned when WPA money became available for libraries. Mrs. Sims was rehired for 32 hours a week. Nellie McGowan was also hired. The library was open every day from 9:30 a.m. to 5:00 p.m., except for holidays and Sundays. There were 160 books in circulation at the Carleton Branch. The librarians also cleaned and repaired books for the school district and received ten cents per book.

In February 1936 the library was expanded and contained 621 books and a large number of magazines.

In the summer of 1936 the first overdue fines were levied: one cent per day. In September 1936 Mrs. Sims resigned due to ill health and Eva Peles, a secretary at the WPA Monroe office worked as a temporary librarian.

A ‘rental library’ was added in December 1936, whereby newer books could be taken from the library at a charge of ten cents for three days. One of the first rental books was Gone With The Wind by Margaret Mitchell.

In January 15, 1937 Nellie Kelley became the new librarian. She was a 1936 graduate of the Carleton High School.

In the fall of 1937 funding became an issue again and the county Board of Supervisors were asked to vote for some operating money for county libraries. Due to the increasing number of people on the welfare roles the Supervisors were forced to vote no.
Civic clubs throughout the county conducted fund-raisers to keep libraries open. In January 1938 the county Board of Supervisors again voted on the issue of money to support libraries. The vote carried, mainly due to public outcry and support, and $75 a month was taken from general funds to supplement any federal and state funds available for libraries.

On May 3, 1938 funds became available through the Youth Aid program and Evelyn Miller and Marguerite Gruber were employed at the library for two hours each afternoon.

In November 1938 the Michigan Library Association commissioned a fact finding study by Columbia University to survey county libraries of the state and made recommendations. Circulation of books from the Carleton branch was reported as averaging fifty volumes per day. At the time the library was open two days per week.

As a result of a state grant on March 8, 1938, eighty new books were added to the Carleton library in May. Additional volumes were purchased and added to the collection in December, and by January 1, 1939 the Carleton branch had 800 books and numerous magazines.

From July 1, 1939 to June 30, 1940 the branch circulated 13,034 books and magazines. Twelve local schools used the library to supplement their curriculum.

Katherine Miller became librarian of the Carleton Branch on November 22, 1940, succeeding her sister, Evelyn Miller-Wreede.  Evelyn married Robert Wreede on August 31, 1940 and in accordance with WPA guidelines could not remain employed by the library after her marriage. Katherine Miller and Marguerite Gruber continued to run the library until Marguerite’s resignation in 1941. Rose Ankenbrandt was hired to fill the opening.

When Miss Ankenbrandt was married in July 1943 she resigned. Cora Glidden was hired and remained at the library until March 1944 when she also resigned.

Minnie Ohlemacher accepted the post of Carleton librarian on March 14, 1944.

Since 1934 the library had been housed in a small office/lobby space of the Carleton Messenger newspaper. On June 30, 1944 the library was moved to its new home in the old Egle building on Monroe Avenue. Ash Township voted funds to pay for heat, rent, and lights in the new location. The library was open seventeen hours per week.

The formal dedication of the library was held on July 27, 1944. Will L. Wright was honored at the dedication for his continued help in getting the library started, and in helping to keep it open during times when WPA funding was spotty or unavailable. Dr. J.H. McMillan, chairman of the county library board, presented Mr. Wright’s photograph to the Carleton library. The photo is on permanent display at the current library.

On June 3, 1949 the Egle building was sold and eventually razed. The library was moved to the new Ash Township Hall on Mill Street and shared the building with the Ash Township Fire Department. The county library branch was charged no rental or upkeep by the township. The librarian’s salary and library materials were paid by the county library board. This arrangement continues today.

Mrs. Minnie Ohlemacher remained as Carleton librarian until January 15, 1960, when she resigned at the age of 71 years. A retirement dinner was held at the Monroe Inn on February 18 and hosted by Mary Daume, county librarian.  In honor of her many years of service Mrs. Ohlemacher’s photograph is on permanent display at the current library.

Jodie McEwan was hired to replace Mrs. Ohlemacher. In December 1961 a shortage of operating funds forced the Monroe County Library System to announce the closure of its branches. The Carleton branch library closed on Friday, January 13, 1962 but re-opened Monday January 16, 1962 when the Monroe County Board of Supervisors made available a fund of $14,350 to insure continued operation of the branches and bookmobiles. Branch libraries were to be open twenty hours per week. Darlene Whiteaker was hired as an assistant in September 1970.

In 1982 there were 15,000 books in the branch and over fifty different magazine titles. The library was open thirty hours per week.

In the mid-90’s a grass roots movement began to build a new library to replace the overcrowded Mill Street location. A Friends of the Carleton Library group was formed, and within a few years a new library was constructed by Ash Township on Kent Street in the village of Carleton. Dedicated in January 1994, the present building is 6300 sq. feet and is a replica of a nineteenth century railroad depot in recognition of the significant contribution of the railroad in Carleton history.  Thomas Mell was the Ash Township Supervisor. Dick Booth and Bob Swick, township board trustees, were actively involved in designing and building the new library.  Mike Gill served as chairman of the Building Authority responsible for overseeing construction.

Mrs. McEwan retired on January 31, 1996 after 36 years of service. Marie D. Chulski (Sowa) was appointed librarian of the Carleton Branch on January 8, 1996.

Due to the successful partnership of Ash Township, who provides, operates, and maintains the building, and the Monroe County Library System, who provides staff and materials, the Carleton Branch continues to thrive. Annual circulation in 2006 was 88,138. Over 7500 people attended events or programs at the library, and more than 12,700 patrons accessed the Internet during 2006.

In March 2008 David Ross became the Community Librarian for the Carleton Branch when Laurie Breitner left to become Head of Collection Services.

The library is open 54 hours per week and offers traditional materials including books, magazines, newspapers, movies, and music in compact disc format. The library provides materials in electronic format via recreational and scholarly databases and downloadable audio books.

The Carleton Branch has four computers with Internet access, and two terminals dedicated for word processing. All computers are available for public use.

Programming for families is our main strength. The library offers three literacy based programs per week for children under five years of age and numerous programs for school age children and teens. The highlight of our programming year is our well-attended Summer Reading Program during the months of June and July.

The Friends of the Library provide support and funding for library programs and supplies. Ongoing fundraisers include a book sale composed of books and movies donated by patrons, and newspaper recycling, available 24/7 using paper bins located in the library parking lot. To join the Friends of the Carleton Branch Library, or for information about their next meeting and current projects please contact the library at (734) 654-2180.

The library is a busy place.
Our enthusiastic staff is committed to continuing the legacy of the Carleton Branch by providing superior customer service to our community. Stop in and visit!

Events at the Carleton Branch Library