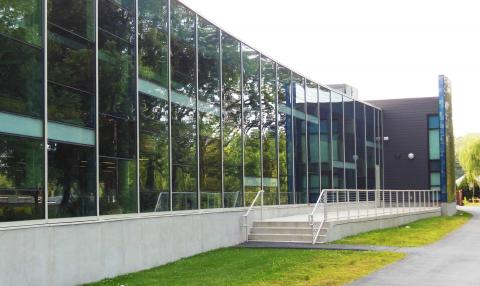 In 1959, the Monroe County Library moved into the first building in the county constructed specifically for library purposes.  The facility, the Edward D. Ellis Library, was named for the originator of the state constitutional provision allocating penal fines to libraries.  Located at 3700 S. Custer, the library would serve only as a headquarters, with offices, storage, and a garage.  Soon, though, space was reallocated and the doors were opened to public service.

By 1964, Ellis was stocked with 48,000 books.  A 1966 addition doubled the size of the stack area and added a dumbwaiter, reading room, and new garage space to house the library’s bookmobiles.  Book storage space was enlarged in 1977 by converting the former garage, and a new garage was constructed on the building’s west side.

The Ellis Reference & Information Center became both the Library System’s headquarters and its most-utilized branch.  Special collections devoted to Gen. George Custer, Federal, State and Nuclear Regulatory Documents, genealogy, and local history, became a draw not only for county residents, but also regional and national researchers.

The next major revamp of the building occurred in 1991, when, for the first time, a children’s room was created from space left vacant after the system phased out its large collection of 16mm films.  Storytimes and other children’s programming flourished, but the space did not allow all of the children’s materials to be housed in one space.  The existing public service areas remained cramped and uninviting, the facility’s infrastructure was in need of updating, and modifications were required by the Americans with Disabilities Act.

In 1998, the library board moved ahead with a renovation of Ellis that addressed the space and building needs and, for the first time, arranged the entire space with an eye to making public service priority one.  Administrative offices were moved upstairs so the sweeping view of the River Raisin would be available for patrons to enjoy.   This iteration of Ellis opened in 1999 to rave reviews.

Growing demand led the library board to approve a two-phase plan to open the entire Ellis building to the public for the first time in its long history.  Administrative offices and staff were moved to the new Mary K. Daume Library Service Center, freeing Ellis to expand into the existing space, as well as add a riverside expansion with a sweeping panoramic view of the river, study rooms and, for the first time in the building’s history, a dedicated multimedia programming room.

On Sunday, April 10, 2011, the renamed Ellis Library & Reference Center opened its doors to the public, who enjoy a complete transformation of the space, with enhanced areas for children, families, teens, researchers, and internet users.

The Monroe County Library System, partnering with the MI-SBTDC, presents the Business Resource Center. Located upstairs at the Ellis Library & Reference Center, the BRC includes a collection of books and other resources to aid entrepreneurs starting business ventures. Reference librarians are available onsite, as well as by telephone and email. Public internet computers and group study rooms are also accessible.

The Monroe County Environmental Fund grant helped fund the creation of a rain garden designed to filter storm water runoff from the parking lot of the Ellis Library & Reference Center.

The Ellis Library has two study rooms, approximately 10′ x 15′. They can sit up to six people comfortably. The study room upstairs in the reference area can be signed out at the reference desk, or it can be reserved beforehand by calling the reference desk at 734-241-5277. There is no charge to use the rooms.